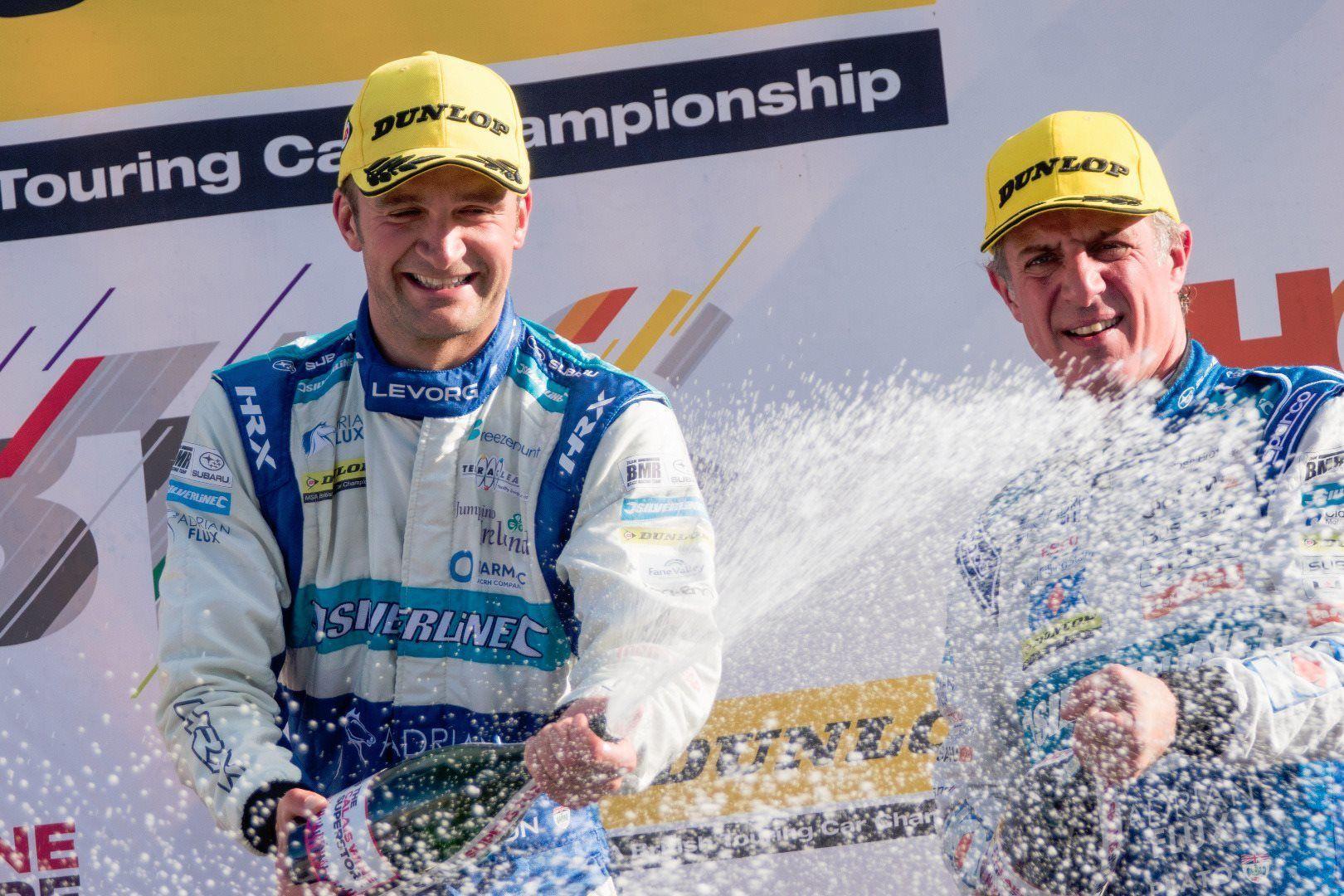 Colin claimed the first point of the weekend by qualifying on pole on Saturday afternoon’s cloudy and rainy session. After a halt to retrieve Aron Smith’s rolled car from Hawthorns, the rain came, creating tricky conditions where it was difficult to maintain tyre temperature and gain positions up the grid. Jason qualified in 4th, James in 22nd and Warren in 23rd. After Tom Ingram’s Toyota failed a ride height check; the trio of Jason, James and Warren all moved up the grid one position.

In the first race, The Levorgs made great starts and held fast until an incident involving Andrew Jordan and Hunter Abbott issued a safety car. At the restart, Colin created a gap and controlled the pace to score a lights to flag victory as well as a point for the fastest lap and 22 points overall; bringing Tordoff’s championship lead down to 20 points. Jason brought his Levorg home in fourth place overall, scoring 13 points but putting him out of the title race. James finished the race in 23rd place and Warren had a puncture and a trip through the gravel, finished down the order.

For race 2 both Colin and Jason gained additional success weight due to their finishing positions and with both cars being on the soft tyre, bringing a tougher challenge to the race. Colin and Jason started well, with Jason attacking Rob Austin and James and Warren moved up the order to 20th and 22nd respectively. Jason was looking for a way past Austin, which enabled Colin to open a gap at the front of the race.

The safety car made another appearance due to fellow title contender Matt Neal’s dramatic crash in the Honda, which ended his weekend. When the race restarted, Colin again opened a gap. Jason overtook Austin at Surtees into second place and Gordon Shedden followed past into third. Jason was closing the gap to Colin lap by lap; and BMR asked Jason to hold station and act as a rear gunner for Colin. Jason kept Shedden at bay and allowed Colin to drive from the front and bring home a 1-2 finish, with James in 20th and Warren in 23rd.

The reverse grid draw was made by Micky Butler, Dunlop UK who drew number 7 meaning that Mat Jackson on pole position with Jason in 6th and Colin in 7th.

Success weight again played a factor for Colin, who was held back in traffic trying to get a clean start and dropped to 10th position. Meanwhile, Jason had a flying start and instantly started to attack Shedden. Both James and Warren both got away without incidents and James was up to 17th with Warren running in 21st. The safety car however was then deployed for Warren after contact from Dan Welch sent him into the gravel ending his race prematurely.

Racing resumed and Shedden took 3rd from Tordoff and into the lead in the championship standings. With Jason now running in 8th and Colin in 12th, both struggled with the weight as James moved further up the order to 16thA further safety car was deployed for the stricken car of Dan Welch which left just a couple of laps left to decide who would reign supreme in 2016 and walk away with the title.

Racing resumed once again and the three remaining Levorgs held their positions with Jason finishing in 10th, Colin 12th and James 16th. Jackson in his Ford took the race win, with Aiden Moffatt in second and Gordon Shedden took third and the title of 2016 British Touring Car Champion for the third time in his BTCC career. Ultimately it wasn’t enough and Colin finished fourth in the championship with Jason ending his 2016 campaign in 7th.

Paul Tunnicliffe, Managing Director, Subaru UK commented – “When we started the season our expectations were low. An all-new car, with very little preparation time, we planned on 2016 being a year of learning and experimentation. In the event, these objectives were blown away. Certainly, there were dark times, especially early in the season, but, thanks to the skills and dedication of the technical team at BMR and their drivers, these were overcome, and we enjoyed a second half to the season which we never could have anticipated. By Brands Hatch we were transformed from the cinderellas of the championship, to being the team to beat. With some justification, we expect to start 2017 as firm favourites.

“We have attended every round, with dealers as our guests, the project having really captured the attention of those close to the brand. Even our colleagues in Japan have been watching the races, often live in the middle of the night. We cannot wait for Donington next March, when we can start all over again”.

“Congratulations to all the drivers, mechanics and support staff who worked so hard to overcome the challenges facing the team at the start of the season. You all did a great job in getting the team and the drivers so close to the top of the standing table. Enjoy the offseason!”

Warren Scott commented – “I am so immensely proud of what the team have achieved in our maiden year as a Manufacturer team with Subaru UK. With a new car a lot of credit goes to the drivers who have managed results without any extensive testing and to finish on the points they did driving young cars is remarkable.

“Huge thanks to Subaru UK, all our sponsors and everyone in the team, the results speak for themselves and are proof of how hard everyone has worked to make it all possible. “We will continue to develop the cars over the winter to ensure that we come out even stronger for the 2017 season”.

Colin Turkington commented – “I don’t really know where to start in summing up our weekend, it has all happened so fast and I now find myself in China testing a Chinese Touring Car! I am beaming with satisfaction with a phone full of heart-warming messages and missed calls. So something pretty special must have went on!

“I knew I was a significant outsider coming into the season finale, but I still wanted to prepare and plan like it was my crown.

“That has been my approach all season, and I can honestly look back at every weekend and say I give everything I had. I never missed an hour’s preparation and I put 100% into every lap I had the Levorg on track.

“In the end it just wasn’t meant to be, but I am far from disappointed. Yes I was saddened to know that I couldn’t get any more out of race 3 and my chances were over, but overall it was a near perfect weekend.

“It’s been a season of up’s and downs with DNF’s, DNS’s, grid penalties and tough battles but we kept our focus and kept pushing onwards. You can’t start contemplating what if’s or what might have been, all you can do is look back and be proud of the success that we worked so hard for.

“I would like to thank every last member of Silverline Subaru BMR Racing and all my fantastic partners, supporters and fans. 2016 has been a roller-coaster and one that will stand out for me for the rest of my career”.

Jason Plato commented – "The finals meeting at Brands Hatch always produces fantastic drama and action and this year was right up with the very best.

“Our Silverline Subaru Levorgs were once again the class of the field on the demanding Grand Prix circuit and produced fantastic results for the team.

“This season has given us all lots to be excited about for the future and I can’t wait to begin testing for next season.

“I’m confident that with the winter test program we have planned we will arrive at the first race of 2017 fully prepared to win the championship.

James Cole commented – “I can’t believe how fast this season has flown. Seems like only yesterday we were back here at Brands Hatch with four brand new Subaru Levorg’s. What a roller coaster of a year.

“I have so many positives to take out of this year and I really can’t wait to get back in the car ASAP and get lots of winter mileage under my belt.

“I would like to thank the whole team on an amazing job. A special thank you to my three fantastic team mates for all their help and encouragement throughout the year. I’m so excited to see what 2017 brings!!!"